I created this piece for In Homage on Salt Spring Island. The idea behind the show was to create an artwork based on an artist who has been an inspiration to you.

I chose The Perseus Series by Edward Burne Jones as my inspiration. These paintings are in the Southampton Art Gallery. My father used to take me to this art gallery on Sunday afternoons when I was a child. I loved these visits; it was fun to go somewhere alone with my father. I liked visiting my favourite paintings, which all had dogs in them. And the elderly guards would always have pocketfuls of sweets to share.

When I was a teenager, I would visit the gallery on my own and The Perseus Series, hanging in a wood-paneled room, were my favourites. I wanted to be a Pre-Raphaelite painting.

I decided to make a cope for Medusa, a powerful and much maligned figure in Greek mythology. I dyed many kinds of silk with an array of natural dyes to achieve hues similar to those used in the paintings. I chose to make a medieval cope in recognition to Burne Jones' affiliation with the Pre-Raphaelites. The natural dyes were a nod to his friendship with William Morris and his participation in the Arts and Crafts Movement. The final layer of pieced silk organza echoes the many stained glass windows designed by Burne Jones for churches and cathedrals all over the United Kingdom. 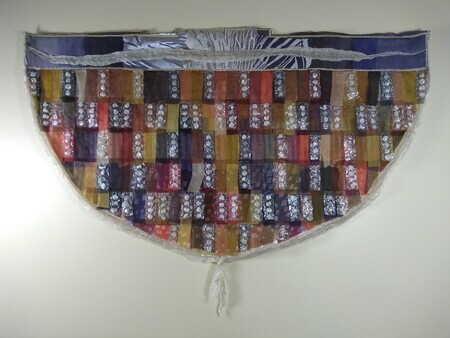